This is the introduction that I contributed for the new Fulfilled Covenant Bible. It is now titled The Kingdom Bible (TKB).

The books of  Ezra , Nehemiah, and Esther are unique among the historical writings in that they give us no new communication from God within the context of the respective stories themselves. That is, there is no “And a prophet spoke in the assembly, “Thus saith the LORD…” or “And a dream came at night to Solomon …”. In Esther, additionally, there is not even a reference to God.

In Ezra and Nehemiah we have godly men praying to God, invoking promises already given, and resting firmly upon what was already revealed. These all rested in the Covenant mercies of the LORD. There is no recorded response from God – other than the unmistakable proof of the eventual successes of their respective God -ordained purposes. [1]   As such, these books are fitting models for Christians of the New Covenant, who likewise rest in the promises of the same faithful but invisible Savior, in spite of seeming silence and distance.

Ezra and Nehemiah are both a recapitulation of the glories of the past and a presage of a future spiritual  greater glory. Several passages of the rebuilding of the temple recall the first building. Lumber is once again rafted down from Lebanon, etc. But this recollection is a bittersweet one. The erection of the Temple provokes both shouts of joy from the hopeful younger generation and weeping from the older.

Originally Ezra-Nehemiah was considered a single unit in the Hebrew canon – just as we today view 1st and 2nd Chronicles – but were first treated separately by Christians around the 3rd century.

The Problem of Names and Dates

There is a special difficulty in fixing the chronology of Ezra-Nehemiah. There is considerable variation between conservative – even Preterist – writers on dates. There are several reasons for this, too complicated to deal with at length here. An ancient but oft-copied error concerning names ( Xerxes for Artaxerxes) has been especially problematic. The Greek historian Thucyidides, a contemporary, provides us with the important fact that Artaxerxes Longimanus’s reign began 473 or 474BC. Thus the twentieth year of his reign would be 454 BC (Ussher). [2] This is the date of the very decree, Neh. 2:1-6, that begins the Seventy Weeks of Daniel 9.

The history covered by Ezra-Nehemiah (along with the contemporary Malachi) bring to an end the first division of Daniel’s 70 Weeks. These books evidence the “seven weeks” (49 years) of the city being built “even in troublous times”, Daniel 9:25. 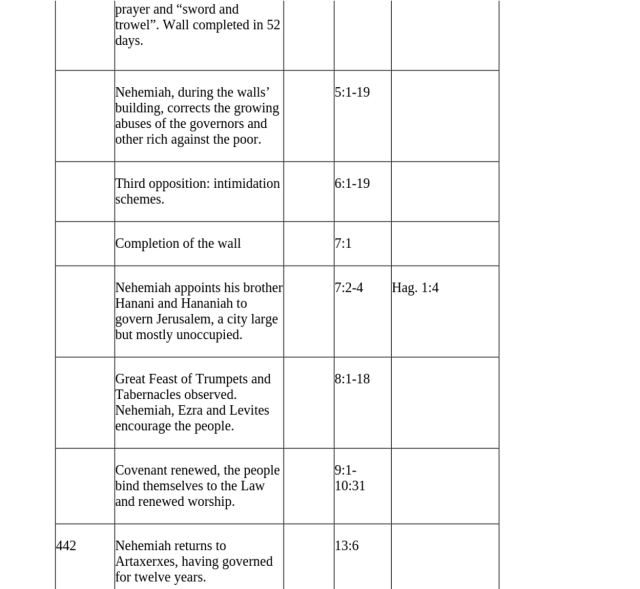 Both Ezra and Nehemiah, on the authority of royal permission, are instrumental in restoring post-exilic Judah to a return to the God of the Covenant. The Temple and the city, through the instrument of these two men of God, are rebuilt. Both Ezra 9 and Nehemiah 9 (and also Daniel 9) show a lengthy and rich intercessory prayer of confession and supplication for the people of God.

Both men show them to be worthy examplars of the Old Covenant. We can follow their examples in principle, though not always in practice. (Mixed marriages and Sabbath observance have long since ceased to be issues).

Ezra begins with a repetition of the last passage of 2nd Chronicles, with Cyrus’s permission for the Jews’ return to their land to build Him [God] a house at Jerusalem”.  See timeline above for particulars of the return and subsequent events. The persons returning in this first wave, mainly from the tribes of Judah and Benjamin, along with Levites,  are listed in chapter two. (The Nehemiah here is not the same as the one of the next book.)

Ezra encounters, as Nehemiah will a few years later, opposition from without as well as troubles within. The similarities of those internal troubles experienced by both Ezra and Nehemiah, Sabbath profanation and intermarriages, has led many to assume that the events coincided. But Ezra encountered these problems twenty-five years before Nehemiah did. (See timeline).

Nehemiah, “the king’s cupbearer”, was “a man of like passions with us”, moved to tears – and then to prayerful action – by the deserved disaster that fell upon his people and his beloved city.

The events of this short book cover a longer period than some might imagine. Over the years the governors of Israel deteriorated in character. From the good example of the first governor, Zerubbabel, we descend to later governors who abused their power, buying up land and reducing the poorer of their fellow countrymen to servitude and financial hardships. Their exacting of gifts, alluded to by the Prophet Malachi, was an abuse aided by the absence of Nehemiah from Israel. A further deterioration is found in the same time; Tobiah the Ammonite  progresses from a mocker of Nehemiah’s work, 2: 19, to an infiltrator, actually living in the Temple premises! The end of Nehemiah “ending with the deaths of Malachi and Nehemiah in the last ten years of the fifth century B.C”4 coincides with the end of the Old Testament, and of the first division of Daniel’s Seventy Weeks.

Value of Ezra and Nehemiah. We can see God’s hand in an inspired overview, over the span of years. From chapter to chapter we can scan beyond the harrassments and impediments to see the work completed in God’s due time. This encourages us that our own impediments are also merely, so to speak, just a few verses long, that God is faithful and will fulfill what He ordains for our life. We need only to remember to, in the context of these two books, follow the footsteps of Ezra and Nehemiah – in principle.

1. Although we can infer that both Ezra and Nehemiah were encouraged by the contemporary prophets Haggai and Malachi, we find no mention of them here. We do find addressed here the same themes of those two prophetical books; true repentance toward God, the sin of mixed marriages, worldliness and avarice of the priests and leaders, etc.

2.Proof and further elaboration on these dates can be found in Thucydides’s, Peloponessian Wars, Ussher’s Annals, ed. by Larry and Marion Pierce. See especially Pierce’s careful notes on both names and dates as well as for the history of the error that is now so commonly found in most Bible margins today . Also see Christology of the Old Testament, Hengstenberg as well as Vitringa.

3.Nehemiah 12:22 refers to the reign of Darius Nothus. According to Ussher (and John Owen in verse Neh. 12:12 as well) we have an addition to the book from after Nehemiah’s time. Jaddua was the high priest who went out to meet Alexander the Great outside of Jerusalem. See Owen’s Commentary on Hebrews (Ages Software), Exercitation 15, p.446.

5. The “certain days” being “many years” is ably examined by Albert Barnes, Commentary to Daniel, Vol.2, p.175.

I breathe, therefore I blog.
View all posts by asterisktom →
This entry was posted in Bible. Bookmark the permalink.

2 Responses to Preface to Ezra-Nehemiah

This site uses Akismet to reduce spam. Learn how your comment data is processed.